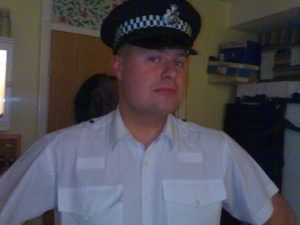 After many years of trying, many years of application forms and hope the day had arrived to commence my 18 weeks of residential police training.  I woke up with an excited anticipation but yet it was masked with a dull sadness as I was to leave my family home and town of origin for the first time in my life. If I had my own two feet now was the time I needed to stand on them.

I said my goodbyes and boarded the train for the journey into a new life, forever aware that the old life was attempting to magnetically cling onto me, but my new life was one that I had dreamt of for a long time.  Would it live up to my expectations or would it fail miserably. Have I made a mistake or was it a good choice? Only time would tell.

I arrived at my destination, the training college and was allocated into a class and I met up with my tutors and classmates who would be an extension of me for the next 18 weeks of gruelling exams, morning uniform inspections, tested scenarios and continuous tests to assess our general ability for the role. A high failure rate was the norm but I was determined not to be that statistic.

A doctor was permanently onsite for the stress factor and general push and pull on the body as the weeks took their toll. With each week the horizon drew closer, that light at the end of the tunnel came forever nearer to the passing out parade that would see us leave here and venture onto the mean streets to start our careers.

18 exams later, 18 weeks of shouting and screaming at the hands of the ex-army drill instructors and 18 weeks of torrential tests had now come to a delightful end.  The day had now arrived just as fast as our family had arrived to witness their loved ones parade for the last time on this famous and hallowed training ground.

Tears flooded the parade square and army band music set the rhythm; our battle lines were drawn as we stood to attention before the final march and inspection.  A rigorous regime likened to the military by those who had left it to come here.

The sound of marching feet took centre stage as the formation gathered in synchronicity like the crashing of the ocean’s waves upon rocks of the shoreline.

Memories formed and life time associates made, we all wished each other well as we left the training centre which had been our home for over 4 months for the last time. The child had become the adult and the apprentice had become the fledged.

It was Christmas and I went home for 2 weeks leave going back to my old life for a short time but I was a different person, I now had my career and my dream had been fulfilled.

If I had had retrospect in a bottle then things may have been different from the onset, I may never have joined had I have known that I would be leaving in 2009. I had never anticipated leaving; I was going to be there forever and a day.

But sometimes life has different plans; life directs you to where you need to be at that time often for a greater purpose than we can possibly know at the time.  Sometimes we find ourselves unknowingly stepping from each stepping stone venturing in a direction we cannot immediately see.  That is what happened to me.

The lesson that it taught me and the experience that it gave me has now come into fruition with my new path.

Over the coming weeks I will detail many things like some of the incidents I dealt with and will give you a look on the inside of the force.