I’m not one to voice support for politicians; I view them often with the contempt that they deserve. However I was reading a newspaper today and saw a story regarding former London Mayor Ken Livingstone who recently said that Hitler supported Zion by wanting to send Jews from Germany to Israel. He has been attacked and mocked in the street by people claiming he is anti-semitic and a conspiracy theorist. Firstly he is correct, Hitler was involved in a movement that wanted Jews to return to the Promised land, which is a Zionist wish and agenda. Secondly the word conspiracy theory was created by the CIA to debunk anyone challenging the official story of the Kennedy assasination. Thirdly the word anti-semitic cannot refer to those challenging Zionists as many Zionists are actually Khazars and not semitic at all, again this was a term phrased by B’nai B’rith to again debunk those challenging Zion.
Ignorance shouts and screams so loud and those shouting with the loudest screech should look into their facts before the rhetoric they speak is said.  Many of the fake wars being fought today are for reasons of Greater Israel and Zionist agendas. And as for Hitler; he was probably allowed to escape post war by the vatican who gave high ranking Nazi’s catholic passports and fake identities in order to flee Germany and settle mainly in places such as Argentina; ironically where the current Pope was born. 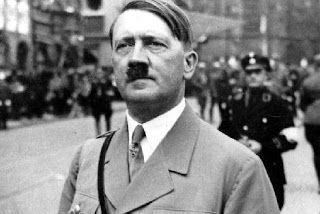 Learn the facts; learn the true history before shouting at those speaking truth in a world run by ignorance and apathy for awareness.
Best Regards
Michael Feeley