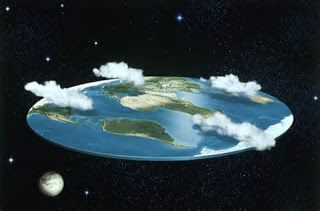 There is much talk among the entitled ‘Conspiracy Theorists’ of a flat Earth. I have been asked many times now what my opinion/position is on this subject.  It is my opinion that the Earth is a sphere and the flat Earth theory is nothing more than a distraction. My reasons are that the number 12 completes the circle and the universe is a Dodecahedron, which has been scientifically proven, therefore it relates to the number 12, the circular/spherical shape. Also Earth’s polar opposites push against each other to create a magnetic shield, a dynamo effect which shields us against harmful solar rays, using Earth’s molten/liquid core creating a convection effect which i think is only possible with a spherical shape not a flat surface. When i look at the sun and moon i can see that they are not a flat,when i look at ancient carvings and scrolls that show the solar system with its planets thousands of years before modern science knew about them, everything is a sphere, so why would Earth be flat?
When the so called truth seekers and oppression fighters stop fighting amongst themselves then maybe they may just get somewhere.