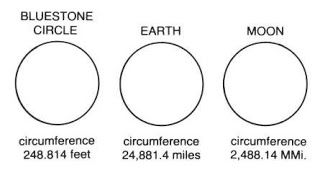 (Bluestone circle at Stonehenge and its planetary correlation to Earth & Moon)
There has always been a mystical marriage and special connection between the Moon and Earth and the ancients signified this within monuments such as Stonehenge.  The Moon has the same isotopes (chemical element) as Earth and was therefore formed in the same area of space at the same time. It keeps the Earth at a 23.5 degree tilt, acting as a planetary stabiliser and keeping the oceans as a liquid, enabling and supporting life here on our planet.
If you divide the circumference of the sun by that of the Moon and multiply by 100 you get the polar circumference of Earth, there is also other mathematical connections too. The Moon is exactly 400 times smaller than the Sun and exactly 400 times closer to Earth than the Sun giving the illusion that they are the same size, this gives us the elipses we see in our skies at various times.  The Moon also revolves exactly one hundredth of the speed that the Earth turns on its axis.
These things are no coincidence and were formed and planned that way.